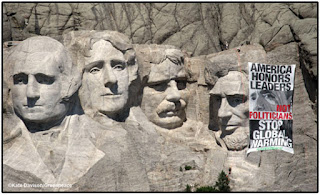 In South Dakota activists with the environmental group Greenpeace scaled the Mount Rushmore National Monument Wednesday and hung a banner urging President Obama [to] take the action on global warming. The banner was hung next to the carved mountain face of Abraham Lincoln. It reads quote “America honors leaders, not politicians: Stop Global Warming.” The action came as Obama was in Italy for talks with other world leaders of the G8 summit. The group of 11 Greenpeace activists were arrested and charged with trespassing. They each face up to six months in prison.

It's hard to believe that environmental activism in South Dakota made news around the world. I can't say that I support everything that Greenpeace does or stands for, but I like this action. They felt that they needed to engage in civil disobedience to make a point. Their actions in South Dakota combined with their other advocacy efforts, combined with the movement to care for the environment have led to significant policy changes and new legislation aimed at reducing pollution, expanding sustainability, and assisting those most hurt by climate change.

I think the decision to engage is civil disobedience in never one people should take lightly; people must consider safety and ethics, and wisely discern the best course of action. If this does not occur, civil disobedience can be counterproductive or even immoral.

Last year six Greenpeace activists painted a smokestack in the United Kingdom as part of an effort to stop the expansion of coal plants. They were also arrested and charged, but they were found not guilty.

They were accused of causing £30,000 (US$53,000) of criminal damage to the Kingsnorth smokestack from painting. The defence was that they had a 'lawful excuse' - because they were acting to protect property around the world "in immediate need of protection" from the impacts of climate change, caused in part by burning coal.

Nick Broomfield directed this fascinating documentary of their story. Do you think the actions of either group of activists was justified?