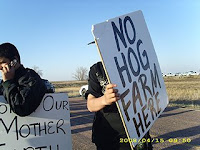 "The Yankton Sioux Tribe of Marty, South Dakota is fighting Longview Corporation's construction of a hog facility on non-Indian fee land within the reservation, which will produce over 70,000 pigs annually. In two weeks since April 15th, 38 Tribal members were arrested by state law enforcement while peacefully blocking construction on a BIA road. Most tribal members are opposed to the construction and are unaware of any consultation with the tribe for environmental permits. One Native American was injured when a skid loader rammed into him as he and others blocked the earth moving equipment. Tribal members are protesting at the site seven days a week and report that construction is also still occuring seven days a week, even on Sunday. The people are praying that their attorneys will be successful at seeking an injunction to prevent the further construction of the hog farm." (REZNET)