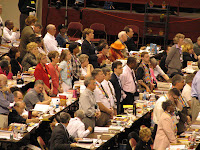 Eventually I believe we will see changes made in the church. While protests and hermeneutical debates may play a role, I believe people are most commonly and most effectively transformed through encountering the Spirit of God moving in persons whom they might not have chosen. May God’s Spirit guide us.