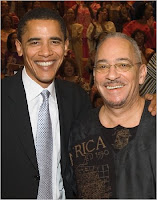 After watching Obama's speech on race I was eager to see the media's reaction. I couldn't help myself to see what Fox News was saying. While several guests and reporters had positive things to say, generally the people were clueless about the nature of prophetic preaching and annoyingly critical of Obama's speech and his associations with Rev. Wright. Even Fox 's own Chris Wallace criticized the continuous Obama bashing. (Thanks Cody)

As I thought about my own reaction to the speech I found myself impressed and inspired. His words were words that needed to be spoken and they are words that need to be heard. It wasn't a perfect speech however, and one shortcoming was the sharp distinction he made between Rev. Wright's generation being angry and following generations being hopeful.

Obama claimed that Wright was mistaken because he was angry, distorted reality, and "spoke as if society was static." Part of Obama's comments resonated with me: "That anger is not always productive...[it] prevents the African-American community from forging the alliances it needs to bring about real change." I've seen that anger, not just in Rev. Wright or other African-American preachers, but in conservative and liberal white preachers, and in people.

Is anger an appropriate emotion for preachers to preach with or for Christians to feel? I am angry that police shot and killed an old woman in Atlanta. I am angry that children are raped and bought as sex slaves. I am angry that we spend trillions on war while people die of hunger. When these feelings of anger are combined with the "belief that society can change" things are gonna happen. I believe Obama was mistaken to basically suggest that young people don't have anything to be angry about and that anger contradicts hope. There is much to be angry at and anger can prevent people from being apathetic. When that anger is combined with the willingness to do what is right, progress can occur. Augustine writes, “Hope has two beautiful daughters. Their names are anger and courage. Anger at the way things are and courage to see that they do not remain as they are.”

My critique of Obama's comments does not mean that I support or reject Rev. Wright's comments. But I do understand Wright's remarks and I believe the anger behind them is legitimate. I will return later to the prophetic nature of his comments and their tactfulness and appropriateness. For now, the lingering question in my mind is this: Is what we say and do grounded in love?